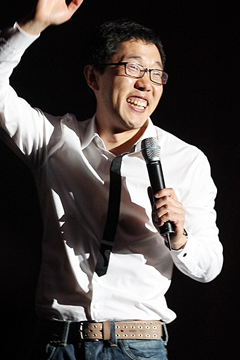 Kim Je-dong (born February 3, 1974) is a South Korean comedian, variety and talk show host on television.
Kim is also famous for being one of the few "socialtainers" in Korea (a portmanteau of social and entertainer), and has received overwhelming public support for his social awareness. Kim has urged people to vote,invested in the crowdfunded political film 26 Years, joined demonstrations for university tuition fee cuts and a reduction in carbon dioxide emissions, participated in flood damage restoration efforts, and has spoken out about cyberbullying, the reinstatement of laid-off shipbuilders at Hanjin Heavy Industries, the Yongsan disaster and the Ssangyong Motors labor strike. He is also known for being a vegetarian, and an eco-conscious advocate of hiking and biking. In 2011, he was included in a list compiled by Yonhap News of celebrities who "habitually" make donations to charity, and he ranked second (71.8%) in a survey of most trustworthy tweeters on political issues.
Despite Kim's reputation as an outspoken liberal, he was invited as one of the hosts of the presidential inauguration ceremony of conservative Lee Myung-bak in 2008. But in 2009, after he hosted the funeral memorial for the late president Roh Moo-hyun,Kim was fired from his highly rated quiz show Star Golden Bell on the state-run broadcasting network KBS. KBS claimed the dismissal was merely part of a program restructuring, but mounting speculation from netizens was that it had been politically motivated, and that Kim and his fellow liberal entertainers were being blacklisted by the Lee Myung-bak government. A year later, Kim had already recorded the first episode of his eponymously named Kim Je-dong Show on cable channel Mnet, but upon learning that Kim would host the upcoming one-year anniversary memorial service for Roh Moo-hyun, the cable company asked the comedian's agency to rethink Kim's participation in the memorial. When the agency refused, Mnet delayed the airing of the talk show's premiere in June 2010, citing rescheduling as the reason. Kim then decided to quit the program on principle. It was revealed in 2012 that Kim was among the TV personalities under illegal surveillance by the National Intelligence Service, causing him fear and anxiety. Despite the dwindling job offers resulting from his political stance, in a lecture in 2011, Kim told KAIST students to maintain humor and happiness amid "merciless reality." Kim said, "We're living in an unfortunate time for citizens right now, but it's a wonderful time to be a comedian. The material is inexhaustible. A reporter asked me why I keep engaging in political activity, and I said that while I haven't done that, comedy will quit politics once politics quits with comedy."
After he lost his jobs at KBS, Kim launched a stand-up show in 2009 at a small Daehak-ro theater.Called "talk concerts," Kim has since held these sold-out shows all over Korea and even in the United States, and in them he shares his views on the absurdities of society and politics, mixing funny anecdotes and insightful observations with biting social criticism.
In February 2010, he began to write for the Kyunghyang Shinmun, a newspaper in Seoul. He conducts witty interviews with experts in diverse fields such as politics, economics, society, and culture. 25 of these interviews were compiled into the 2011 book Kim Je-dong Is Coming to Meet You, and he donated proceeds from the book sales to underprivileged children with no access to cultural activities. He published another book, Kim Je-dong's Arms Around, in 2012.
One of the most popular segments of Kim's act is called "Quotations from Kim Je-dong," in which he makes ad-libbed witty remarks while performing live in response to questions he gets on the spot from the audience. To prepare, Kim said he reads newspapers of all kinds for 70 minutes every day and pastes clippings of editorials into a scrapbook, and writes down his own opinions on them. When asked the secret behind his popularity, he said that "viewers feel a sense of commonality and comfort from me."
He currently hosts the talk show Healing Camp, Aren't You Happy on SBS