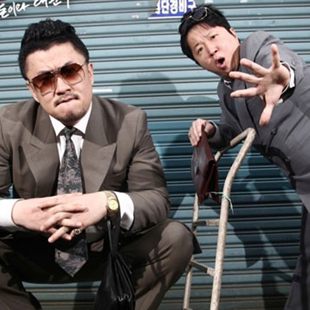 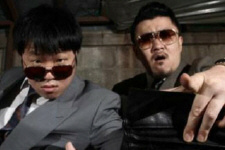 Hyung-don & Dae-joon is made up of comedian Jung Hyung-don and rapper Defconn. The two were actually having some drinks during the day in Gaehwa-dong, when the two thought, "Hey! Why not make music together?"

Defconn sent Hyung-don a track he had produced so that the comedian could add on creative and funny lyrics. The rest is history. The song "Olympic Highway" was born.

MC Yoo Jae-suk actually featured on the track. When Yoo came in to the studio for his recording session, Defconn and Hyung-don were conflicted on what name to go by. Yoo suggested, "Why not just go by Hyung-don and Dae-joon?"

Hyung-don & Dae-joon released "Olympic Highway" as the pre-release track before releasing their mini-album (filled with songs that Defconn produced and Hyung-don wrote lyrics for). Their title song "A Song That'll Make You Feel Worse When You're Down", along with even
their supporting tracks became popular for their funny, cheerful lyrics that everyone can't help but to agree and empathize with.

"A Song That'll Make You Feel Worse When You're Down" is about the raw, brutal truth that no one wants to hear after a breakup.