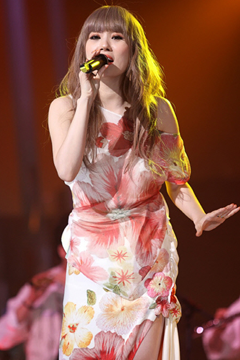 
Lee Soo-Young first came onto the music scene back in 1999 with ‘I Believe’, when ‘ballad singers’ weren’t attracting too much of an attention from the people due to the massive success of boy-bands such as ‘H.O.T’, ‘Sechs Kies’ and ‘Shinwha’. Armed with top composers like Joo Young-Hoon and MGR, the hit-makers of the period, she had the right formula of becoming a star but received moderate reviews at that time. However, backed by her natural singing talent and appealing voice color she didn’t need too much time to be recognized as the new diva.

2years on, her 2nd album entitled ‘Never Again’ gained her a place within the K-pop scene as the ‘Queen of Ballads’, the nickname which she is known to this day, made a massive impression to the fans. In addition, her music video for the song ‘Never again’ which featured actors Shin Hyun-Jun and Han Go-Eun was an instant hit with the viewers of cable music channels which helped cement her place in the music scene. Lee followed her success with yet another album entitled ‘Made in Winter’ later that year which had the fans and critics alike deeply moved and assimilated to her voice earning her yet another nickname, ‘Angle of Ballads’.

Lee Soo-Young, kept on making headlines and topping the charts continuously ever since her debut with her large-scale videos and spare-no-costs for the production of her albums. And her collaboration with produce/composer MGR proved to be the winning formula behind the success of Lee’s mega success. In addition, due to such efforts her albums boast the highest possible accomplishment in quality as the singer believes in giving something back to her fans who forks out their hard earned cash to buy her albums.

This is one of the few qualities that makes Lee Soo-Young, the ‘Queen of Ballads’ more popular and possibly one of the best female singers today.
Her follow up, ‘The colors of my life’ which featured the song ‘Whi-li-li’ made to the top of the charts upon release which garnered her a couple of awards at the year’s-end. And this year, she is back again once more with her 7th album ‘Grace’ showcasing a more feminine side of her. It is still early to say whether if this outing will be as successful, on the other hand there is no doubt that Lee Soo-Young, the ‘Queen of Ballads’, will cast her spell once again to the fans.