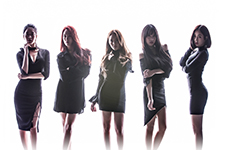 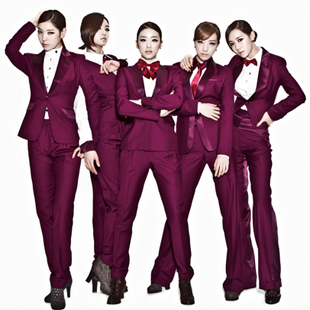 The Brave Girls are a group that was created and produced by the famous Brave Brothers under Brave Entertainment. See the pattern here?

With the backing of two such big names in k-pop, this group has been on the radar even before their debut. After it, sure enough, they've managed to create quite a stir with their title song "Do You Know". Perhaps more than the melody though, it was the dance that got them their attention. With what's called the "Wide-spread dance" and a comic twist they put on during a comedy performance, "dog leg dance", the group has been gaining much attention for their dance abilities.

Also, one of the members had their pictures go viral on the web for her beauty being that she was 2008's Miss Seattle-Korea. Ye-jin was compared to another Miss Korea celebrity, Kim Sa-rang in looks. Another member that has been compared to other Korean beauties was the youngest member Hye-ran . Hye-ran was compared to diva Son Dambi in looks. Member Eun-young, the leader, was also announced to be the niece of actor Shin Ha-gyun.

Within hours after the release of their music, they were already number one on some of the real-time singles charts. There's no doubt they have the right formula: looks, voice, dance, and the supporting team. Only time will tell if that will be enough!